Someone tell me how it’s already the end of May? 2019 is going by in a flash.

B and I have had fun with our seed experiments. We planted tomatoes, bell peppers, long peppers and broccoli earlier this spring.

One broccoli seed & one tomato seed sprouted– and that’s all they did. I thought we’d plant them in the garden anyway, just to see what would happen.

Both were on their “last legs” the day after we put them out on the porch to harden.

And then a squirrel dug them out. *shrug*

The bell peppers and long peppers grew MUCH better than the others– but not as explosive as I’d hoped. So, I’m blaming the quality of the soil in our seed trays…? *shrug*

We planted the entire garden last Wednesday (May 15th.) It was a sunny, warm and beautiful day… and since then, it’s rained 3+ inches. *sigh*

Here’s what we planted:

(Note: All seeds are from Burpee— except for the tomatoes. Some of our tomatoes were purchased locally and some were given to us by a member of our church.)

This is our 3rd year having a garden. I used to HATE pulling weeds, but now I kind of enjoy it. There is something special about carefully tending to seed babies and plants– and then ruthlessly ripping invaders out of the soil with your bare hands. 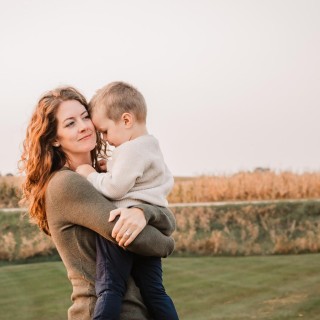 Hi! I'm Kerri. My husband and I call Iowa home, and we have two spunky children and a very patient dog. Our little family is pretty much up for anything-- we love exploring and trying new things together.